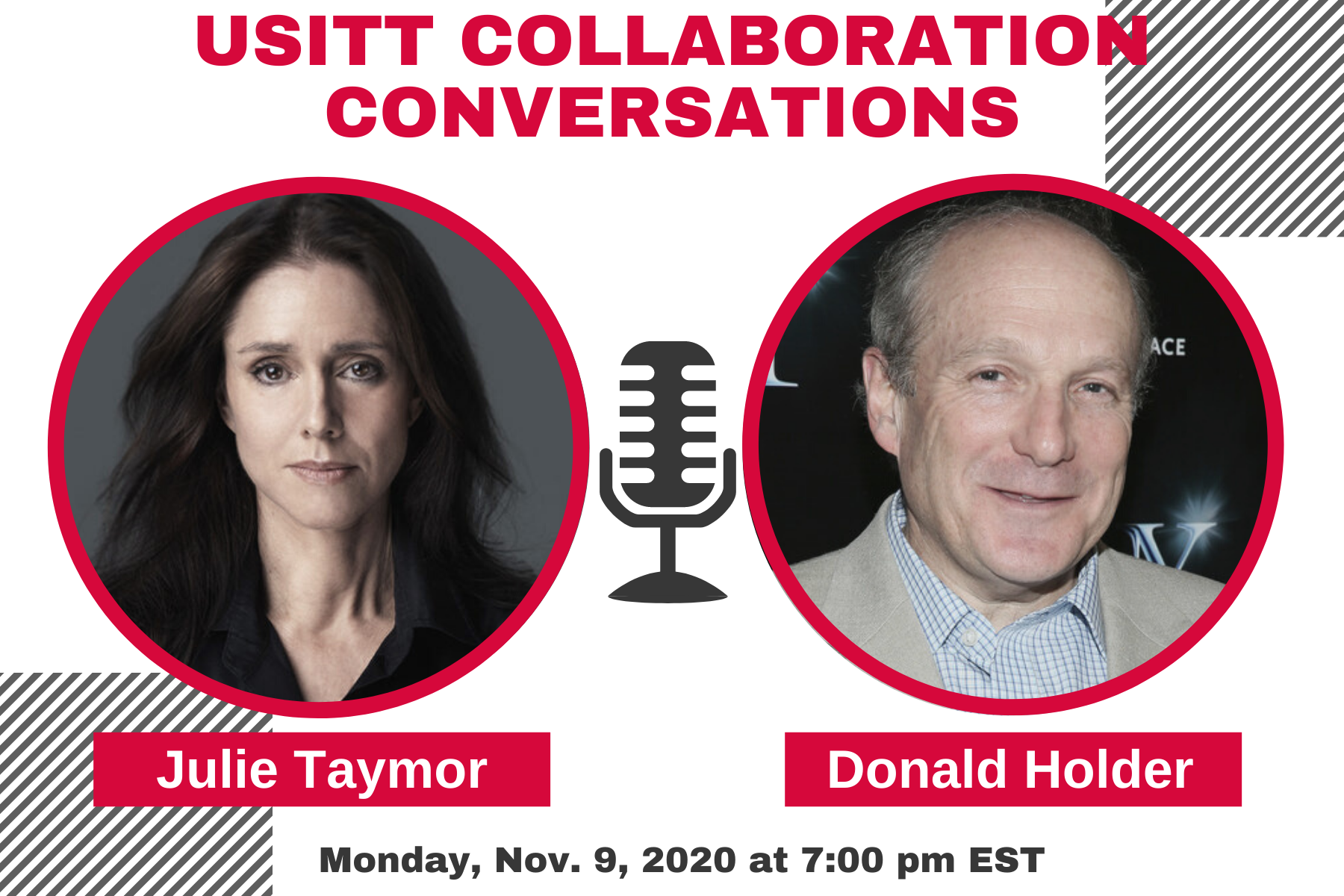 USITT begins a series of Collaboration Conversations by welcoming Tony Award-winning collaborators, Julie Taymor and Donald Holder to discuss the process of working together to build a production. The online event will be held Monday, Nov. 9, 2020 at 7:00 pm EST and is offered free of charge for USITT members. Non-members may attend for $15. Everyone must register in advance at www.usitt.org/events.

In this first USITT Collaboration Conversation, director Taymor and lighting designer Holder, who both won Tony Awards for The Lion King, discuss the designer/director collaboration, giving insight on process and the synergies that can develop when two artistic minds meld to bring a vision to life. The conversation will be moderated by Autum Casey, USITT’s lighting design and technology commissioner.

The Lion King is the highest grossing and third-longest running production in Broadway history. It has played more than 9,300 performances on Broadway since its opening in 1997 until the production was paused earlier this year due to the COVID-19 pandemic.

As a Tony®, Emmy®, and Grammy® winning and Oscar® nominated artist, Julie Taymor has changed the face of Broadway with her innovative direction.

Her Broadway adaptation of The Lion King debuted in 1997. An instant sensation, it received 11 Tony Award nominations, with Julie receiving awards for Best Director and Costume Designer. She was the first woman in theatrical history to receive the award for Best Direction of a Musical. In addition to her Tony Awards, she also received awards for her puppet, costume, and mask designs. The Lion King has gone on to become the most successful stage musical of all time; 24 global productions have been seen by more than 90 million people. The show has played over 100 cities in 19 countries, and its worldwide gross exceeds that of any entertainment title in box office history.

Her credits also include the play Grounded, starring Anne Hathaway, at the Public Theater and a cinematic version of William Shakespeare's A Midsummer Night's Dream, filmed during her critically acclaimed, sold-out stage production at Theatre for a New Audience in Brooklyn. Additional credits: Broadway’s Spider-Man: Turn Off the Dark, The Green Bird, and Juan Darien: A Carnival Mass, which earned five Tony Award nominations including one for her direction. Operas include Oedipus Rex, with Jessye Norman, The Flying Dutchman, Salome, Die Zauberflöte (in repertory at the Met), The Magic Flute (the abridged English version, which inaugurated a PBS series entitled “Great Performances at the Met”); and Elliot Goldenthal’s Grendel. Film credits include Titus, starring Anthony Hopkins and Jessica Lange; Frida, starring Salma Hayek; Across the Universe; and The Tempest, starring Helen Mirren. Taymor is a recipient of the 1991 MacArthur “Genius” Fellowship, a 2015 inductee into the Theater Hall of Fame for Lifetime Achievement in the American Theater, the recipient of the 2015 Shakespeare Theatre Company’s William Shakespeare Award for Classical Theatre, and a 2017 Disney Legends Award honoree. She recently directed M. Butterfly starring Clive Owen on Broadway.
In 2016, Ms. Taymor created the Taymor World Theater Fellowship for enterprising American theater directors (ages 21-34) to experience a year-long immersion in theater in Africa, Central and South America, Asia, and/or the Middle East. Her film credits include, most recently released, The Glorias, starring Julianne Moore, Alicia Vikander, Bette Midler and Janelle Monae.

Holder has worked extensively in theater, opera, dance, and architectural and television lighting in the U.S. and abroad for over 25 years. He has designed more than 50 Broadway productions, has been nominated for thirteen Tony awards, winning the Tony for Best Lighting Design for The Lion King and the 2008 revival of South Pacific. His recent Broadway productions include Tootsie, Kiss Me Kate, My Fair Lady, Anastasia, She Loves Me, Fiddler On The Roof, The Bridges Of Madison County, The King and I, Bullets Over Broadway, Spiderman Turn Off The Dark, On The Twentieth Century, and Golden Boy. Projects at the Metropolitan Opera include Rigoletto (2021), Porgy and Bess, Samson et Dalilah, Otello, Julie Taymor's production of The Magic Flute, and Two Boys (also at the English National Opera). He has worked at most of the nation's leading resident theatres, including Baltimore's Center Stage, Arena Stage, The Goodman Theatre, Steppenwolf Theatre Company, Mark Taper Forum, Seattle Repertory, La Jolla Playhouse, Huntington Theatre Company, South Coast Repertory, and the Williamstown Theatre Festival. His television and film work includes the theatrical lighting for seasons one and two of Smash (NBC- Dreamworks), and for the Warner Brothers feature film Oceans 8. Mr. Holder is head of the lighting design program at Rutgers University, Mason Gross School of the Arts. He is the recipient of an honorary Doctorate from Muhlenberg College, and is a graduate of the University of Maine and the Yale University School of Drama.

Casey is a freelance designer based in New York, working on and off-Broadway as well as regionally. Primarily focused on lighting and projection design for theatre and dance, her credits also include architectural lighting design, scenic and costume design, and intermedia collaboration. She teaches Lighting Design at Barnard College; previous academic positions include George Mason University and Texas A&M University. She currently serves as USITT’s Commissioner for the Lighting Design & Technology.