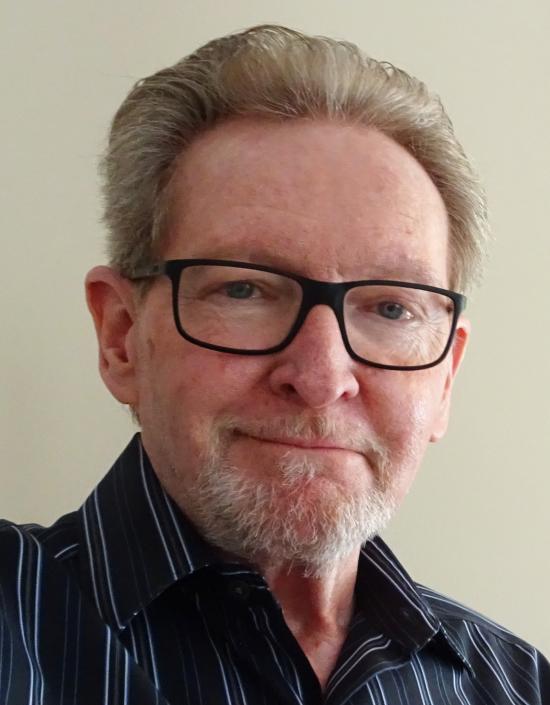 My first encounter with USITT was at the Anaheim Conference in 1975. I went to the conference to interview possible hires for an Assistant TD position I was trying to fill. Before that conference, I did not know there was an organization made up of people who spoke the same language I did, and I found a network of colleagues and friends and have been a member ever since.

One of my favorite memories, among many, was driving Eddie Kook and his wife from the hotel to the airport when I was chairing the Cleveland Conference in 1981. He and his wife were in competition with each other to see who could back-seat drive the best. It was like something out of a Seinfeld episode.

I was fortunate to find an early career as a TD and lighting designer that had its roots in my undergraduate employment as a stagehand in a campus performing arts center. That work-study job allowed me to meet and work with hundreds of professionals in every aspect of the performing and visual arts over four years. Three summers working at Santa Fe Opera and graduate school at UCLA led to a career that included working on over 150 productions in higher ed and freelancing as a lighting designer and consultant. As I grew to understand more about how the whole production process and entertainment industry worked, my career opportunities expanded to production management and producing. Those opportunities, coupled with my teaching, later morphed into a career track in theatre and arts management. The arts management part of my career has enabled me to lecture and present in Japan, China, Singapore, and several countries in Europe.

Steven Hild was one of the determined volunteers behind getting design exhibits started at the USITT Conferences more than four decades ago. He was passionate about this project and showed me how one member could make a difference. While there were many barriers to overcome, he found a way to make these exhibits happen and get them published and cataloged. Steve’s dedication to this project in the late 70s and early 80s paved the way for the numerous design and technology exhibits we have on the Stage Expo floor today.

Henry Tharpe was also an inspiration for his unflappable get-it-done drive at the March 1980 Conference in Overland Park Kansas. A snowstorm, scheduling snafus, and more people showing up for the conference than anyone imagined didn’t slow Henry down. It was a conference that was a USITT “tipping point,” and it set the stage for ever larger and more complex conferences in the years after.

Sarah Nash Gates, Chris Kaiser, and “Gino” Montgomery were inspiring women leaders in USITT. They impressed the hell out of me with their endless energy and devotion to USITT, and especially their commitment to its financial solvency. Being on the Finance Committee with them helped me understand how important it was to connect the mission and planning to the budget. We have them to thank for the fiscal health USITT enjoys today.

Dr. Joel Rubin and Leon Brauner opened my eyes to the fantastic possibilities of being part of the International Activities of USITT. Thank you.

There are many more memorable “characters,” but that’s a good start.

You could have knocked me over with a feather when I was inducted into the Fellows. It was an honor to be among a group of people who helped shape (and continue to shape) the entertainment industry and deeply embedded theatre and theatre design and technology into American universities and colleges after WWII. I am especially proud of the Fellows for ramping up their current engagement with a wide range of activities in USITT and re-affirming their commitment to mentoring future leaders in our profession.

Anything you’d like to add about what the USITT means to you personally?

I can safely say USITT has been integral to my professional development as a theatre practitioner, educator, designer, manager, and leader.  USITT has been my “learning laboratory,” so to speak. There was so much to still learn after graduate school. I don’t know what I would have done if it weren’t for USITT. As I look back on it, USITT was my continuing education program. My transformation from being a “techie” working on load-ins and in the scene shop to being a TD, Stage Manager, Production Manager, Department Chair, Program Director, Associate Dean, a Fine Arts Dean, and an Associate Provost was made possible by my work with USITT. I was also humbled and honored to be among those singled out for the Joel E. Rubin Founders Award in 1996, and by the Management Commission with their Distinguished Achievement Award in Management in 2011, and being made an Honorary Lifetime Member in 2020.

Management and the Arts, 6th edition and the book’s companion website

The Routledge Companion to Arts Management, edited by me and my London colleague Aleksandar Brkić. I also contributed a chapter entitled, “Getting on the Balcony: Deploying adaptive leadership in the arts”

Must have books in the management field (besides my own, of course):

Mentoring?
I am more than happy to help students and colleagues in any way I can be of service.