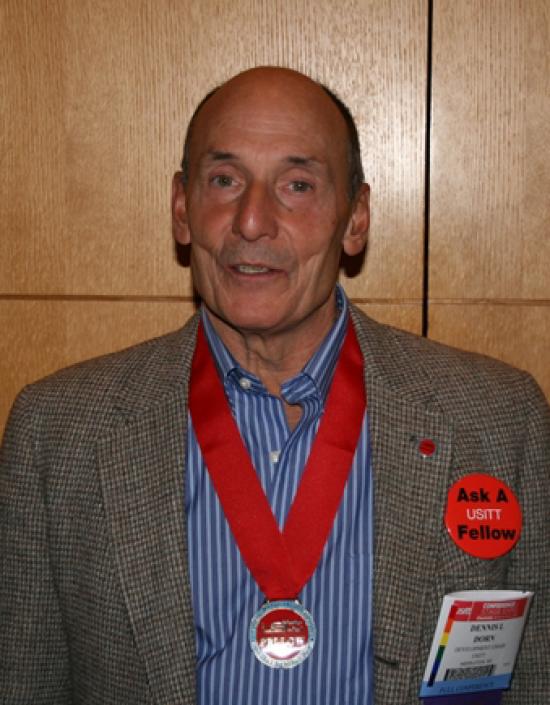 I first discovered the USITT Midwest Section in 1977 and almost immediately became an active member. It was a great group and we had sessions that featured legendary folks such as Eddie Kook, James Hull Miller, Bob Moody as well as a host of local Chicago-based celebrities. I attended my first national conference in 1980 at a hotel conference site in Kansas City, at the invitation of Jay Glerum who recruited me to join him. This particular conference marked a genuine turning point for USITT and was filled with lots of highlights – perhaps most notably the beginning of discussions about rigging safety and industry-member code involvement. The conference was attended by a number of members who I knew by reputation—industry giants—but whom I had never met before.

Three things: One, I was awarded the first Kook Research Grant which was used to pursue a project that measured the actual properties of common theater-style platform staging and which resulted in two articles published in TD&T.

Two, I was given another award through the Technical Production Commission that allowed one of my graduate students, Lisa Schlenker, the opportunity to survey “Job Satisfaction Among Technical Directors,” which resulted in articles, speeches and numerous conference panels as well as two follow-up surveys.

Three, the night I was inducted as a Fellow (2000) was the first time I had missed a Fellows Address in over a decade and I missed the opportunity to hear the sterling introduction given by Ben Sammler. I was in the conference computer room finishing up a report for another session. Thanks to an out-of-breath Mark Shanda I made it to the Fellows session in time for pictures.

Never having even walked on a stage until I switched schools my sophomore year of college, it was my good fortunate to wander backstage at the Memorial Union Theater on the University of Wisconsin campus. There I met a small group of graduate students who welcomed me and involved me in their world, even though I didn’t have any idea of what I was doing. Most of these people went on to have great careers of their own; I was simply in the right place at the right time. John Ezell encouraged me to apply to the Yale School of Drama and following short employment stints at the Guthrie and Yale Rep, I joined the faculties of Amherst College, SUNY-Brockport and then spent 33 years at UW-Madison. The years went fast but I was able to participate in lots of work-related decision-making, serve as technical director and/or set designer for nearly 200 shows, become active in professional organizations and enjoy the experiences of meeting and working alongside many other successful colleagues in my department and across campus. I engaged in some theater consulting, served as University Theatre’s director of theatre for ten years, attended way too many meetings and basked in the careers of my very successful nationally-recognized students and colleagues. Even more importantly I found time to participate in family life (balance is so important), play a role in numerous civic government and service organizations, co-author two books and numerous articles, and create personal as well as professional relationships with future theater artists.

Having started at the regional level in 1977, at first I attended the various gatherings and workshops we held; within a few years, I became involved in programming as well. In time I became a board member, office holder (did them all) and maintained that involvement as I started becoming more active in the national. Bob Scales (my boss at the Guthrie) and Rick Stephens who were co-commissioners for Technical Production schemed to create a rolling leadership pattern and approached Ben Sammler and myself to continue the model in the future. This became the pattern most commissions now follow so that we each have continuity and the opportunity to provide opportunity for other members to step into leadership roles. This decision opened other doors and in time I became actively involved in national programming and both Ben and I took on the role of guiding the creation and execution of Tech Expo. We shared duties with the editing of the catalog and collection and assembly of the exhibit for several years before turning it over to the next “generation” of leaders. Shortly after that I was elected VP-Commissions and served two terms, and have over the years been a member of various committees including Awards, Finance, Graphic Standards to name a few. Since 2003 I have served as one of USITT’s representatives on the Entertainment Technician Certification Program (ETCP) Council.

If you were to make a short list of the memorable USITT characters who have made a difference to you, who would they be?

Here’s a tough question, since I have gotten to know so very many people for whom I have such great respect both as professionals and as people. I’ll mention only a few: George Petterson and Glenn Naselius who made me so welcome in the Midwest Section; Jay O. Glerum who got me to my first annual conference; Robert Scales, Rick Stephens and Ben Sammler who played such important roles in my roles with the Technical Production Commission; Bernie Works and Richard Arnold who spanned both my regional and national activities as mentors and friends; Leon Brauner and Mitch Hefter, who are so very kind and supportive; Sarah Nash Gates one of the most generous people I know; Bruce Brockman and Henry Tharp because they always make me laugh;  and Mark Shanda and Laura Crow, both of whom mean the world to me.

It is a great honor to be counted among those who have made significant contributions to the entertainment industry and to USITT.

USITT offered opportunities and opened doors to me that expanded my world vision far beyond mere employment. It allowed my vocation to be, and remain, my avocation throughout my entire career. Furthermore, it made it possible, especially through grants and activities, to develop friendships, initiate careers, and follow the many successes of my students, friends and colleagues.

Most of us, always assuming there are a few exceptions to everything, delight in the opportunity to speak with young and older students who are entering our profession. Regardless of who we are, we have wide ranging experiences that should be of some help, contacts that can definitely be of help, and the desire to engage with people who share our passion for what must be one of the most influential fields of employment available. I would certainly welcome such opportunities and would feel most comfortable in the areas of technical production, facilities, personnel, organization, and breweries.