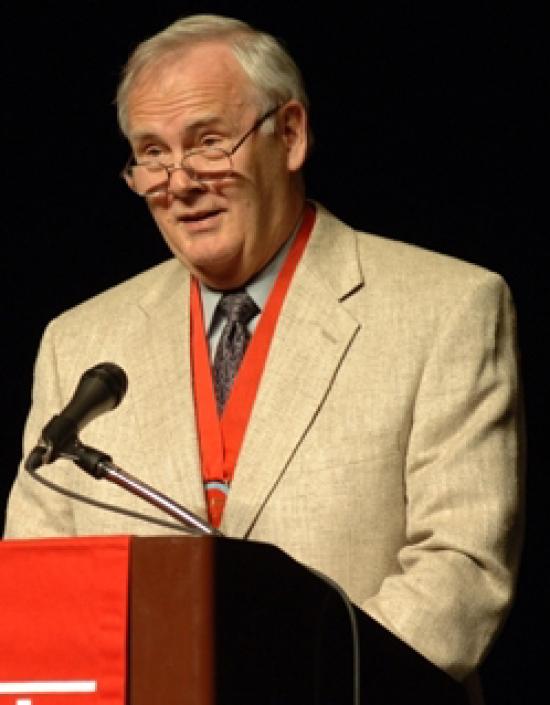 I believe I attended my first USITT conference in 1969 or 1970.  It was shortly after I took a job at Indiana University and I met one of USITT’s best advocates – Gary Gaiser.  As I think about it, Gary was more than an advocate, he was a “cheerleader.”  He cared about “the institute,” education, his colleagues, Hazel, and what he cared about he was also passionate about.  I had already been working in stage costuming at Utah State University and the University of California (Santa Barbara campus), and was aware of USITT, if fact I may have been a member receiving TD&T, but not really a participating member.  Gary had a way of engaging you in those things he cared about and then, before you knew it, delegating or putting you “in charge” of something or other.  But, Gary had another quality – one that he shared with others in the “old guard.”  He was good at introductions.  He was good at entwining your interests with those of other like-minded institute souls.

As I think about those meetings, I am also reminded of the gracious and giving nature of many of those guys and gals.  Gary’s specialty was stage lighting and so most of his USITT colleagues were into stage lighting or the business of lighting.  But you know what?  All of these people wanted to be as helpful as they could be to this young (yikes, I WAS young then) costume guy.  Early on, I met and was initiated into the workings of the Institute by many of our honored Fellows.  I began to list the names I could remember and it became too long and surely too incomplete.

I was able to take a sabbatical in 1970-71.  Both Joel Rubin and Ned Bowman were gracious and giving of their time and contacts.  Joel wrote many letters of introduction and spent time giving me “the lowdown” on specific colleagues and institutions I was going to encounter.  My year was spent mainly in old Eastern Europe, with travels to all of the national theatres and a large handful of smaller city theatres.  I was also loaned some USITT/ USA OISTAT Centre stationary so that I could type (yes it was that long ago) letters of thanks, and also craft my own letters to OISTAT Centres that “I was coming, and would be at their door at such and such a date and time.”  We were six, Roberta and our four young kids and our yellow VW bus – the Yellow Submarine, tootling across slow, sometimes frightening border crossings.  This was considered the cold war period and there were many new (to this young family) and disturbing elements to traveling in these well-guarded, sad, dark places.  Many of my university colleagues had asked why in the world would I consider taking my family into Eastern/ Communist Europe.  On the other hand, Gary, Ned, and Joel helped me understand that we were going to visit people, theatres, culture, and lots of wonderful new experiences.  If it had not been for my USITT colleagues I may not have made this wild, wonderful leap into an unknown world – a world that was described by its politics, or in broad, often ignorant strokes.

This Brauner family OISTAT/USITT adventure lay the groundwork for a life of travels, as well as a life of helping others have life changing experiences.  Many of the people we met on that first adventure have remained good friends and colleagues.  Some have given program sessions at conferences, or given workshops in universities.  The doorway was opened (or opened further) to find places for our designers and technicians to participate in workshops in other countries.

When one traveled in “the old Eastern Europe” days, one was encouraged to check into the consulate or embassy of each new country or city one was visiting.  We became friends with a number of cultural attaches during this travel.  I was asked to give talks on theatre and culture in the USA to small groups of theatre people and often people from the newspapers (nothing too anti-regime about culture – so they thought).  We almost always stayed in private accommodations that we found for ourselves.  We rarely presented our consular colleagues with problems to help us with.  About five or six years later I was contacted by USIA to see if I would like to give a series of lectures on American theatre and culture at theatres in the Balkans.  Why me?  Certainly not because I was the best lecturer on those subjects, but I was nimble and seemed to always land on my feet when in a new situation in a new place.  About a decade later I was once again asked to take on the Associate Directorship of the American Studies Centre at Warsaw University.  Being on the faculty of Indiana University and having previous experience traveling, lecturing, and landing on my feet made it possible for me to live and work in one of my favorite countries.  It sounds as though I may be giving too much credit to my colleagues in USITT – but, I say no.  I would not have made that leap if my Institute mentors had not helped focus me on the value and pleasure that comes from meeting new people in new places and then sharing what you are both passionate about.

I was also fortunate to be able to plan and lead two PQ summer tours.  I think they turned out okay.  The tours were a wonderful opportunity to share travel experiences, and European theatre colleagues with their USITT counterparts.

I ended my USITT service career as head of the USA OISTAT Centre and served on the OISTAT Executive Committee for several years as it secretary.