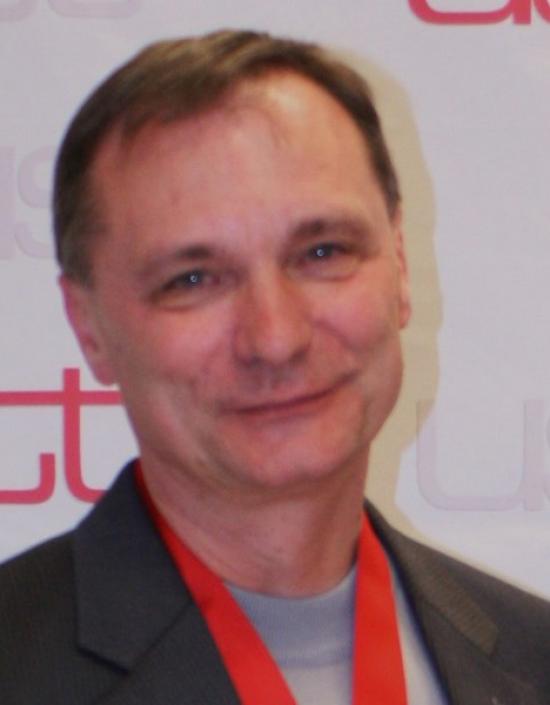 Your earliest memories of the Institute...as in how far back do you go?

1979. I'm guessing it was either Van Phillips or Lee Watson that arranged for me to be on a panel with Harold Burris-Meyer. I was very young (in graduate school), and, at the time there were only two books out (at least that I knew of). One was David Collison's, the other was Harold Burris-Meyer's. Harold Burris-Meyer was just at the end of his career, and it's one of my fondest memories that I was able to meet him and get to know him a little bit before he passed. Such a major contributor to our field. I didn't meet David Collison, another incredibly influential person in our field, until decades later.

Bloodbath of the LIving Dead in 3D at the Milwaukee conference in MIlwaukee Rep's Stiemke Theatre. Back in those days we were blazing trails, introducing new things about theatre sound to the world, and USITT was the place to do it--AES didn't really understand theatre, and most of the other organizations really didn't exist or weren't really players. We made USITT our playground, and BB of the LD in 3D, as we affectionately called it was perhaps the best example. We did--to the best of my knowledge, the first demo of digital audio us in theatre--Sound Tools (that would be the forerunner to Pro Tools), Performer (the forerunner to Digital Performer), the legendary EIII (Emu's Digital Sampler), Command Cue (Charlie Richmond's visionary theatre sound control software, decades before SFX and QLab) all in one giant "sound console" spread across the stage. But the show itself was what I loved. Based on John Pielmeyer's short play, Splatterflick, the play shows us an audience watching a 3D slasher/horror movie.

Van Phillips and Lee Watson, who introduced me to USITT, and mentored me through it, Harold Burris-Meyer, who started it, and I was just lucky to get to know, Dick Devin who made the sound and lighting commissions a reality, Charlie Richmond, who did so much for the sound commission, and then empowered me to do more, Dick Durst, who empowered the introduction of sound into OISTAT--oh, dear, I better stop there, otherwise I'm going to upset a whole bunch of really important friends and colleagues that I left out.

It's pretty humbling considering the company we keep.

Everything. It made my career.