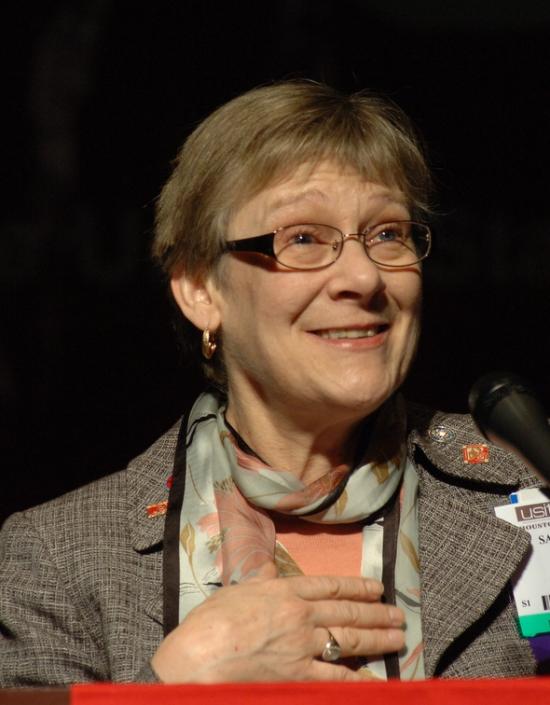 I attended the 1976 Conference in Anaheim at the suggestion of the TD at the college where I was teaching. I had never heard of USITT, but the college would pay for the trip, so off I went. I was thrilled to see and in some cases meet such noted authors as Harold Burris Meyer, Oren Parker, and Mordecai Gorelik! And of course Ed Kook. I attended a meeting of a “Costume Interest Group” and found 100+ people crowded into the meeting room. A lively conversation revealed a group eager to make things happen. Imagine the shock when President Richard Arnold told us we could NOT be “An Interest Group”. And then the cheer as he continued – You MUST be a Commission! Yes, it was the birth of the Costume Design & Technology Commission and I was hooked on USITT.

It is not possible to have only one. Here are some serious highlights:

Here again it is almost impossible to list everyone – I am bound to leave someone out!

My chief USITT mentors are Richard Arnold and Joel Rubin who helped me learn both USITT and OISTAT history and navigate my early years of USITT membership.

It is a great honor to be recognized by ones colleagues/peers. I always have felt that my election in 1989 was a touch premature – but I have tried to be worthy of the honor ever since!

It is a unique place where you can learn a great deal, meet many interesting, helpful and fun people, have unique experiences (touring St. Paul’s in London with Oren Parker listening to him think about how to draft “the sucker” or Millia Davenport talk about visiting the pyramids and working with Robert Edmund Jones) and perhaps most importantly, help others do the same.

One of my favorite things to do is attend the sessions which highlight the careers of our Distinguished Achievement Award Winners. It doesn’t matter what their specialty is. What matters is their passion and dedication to art and industry of theatre.